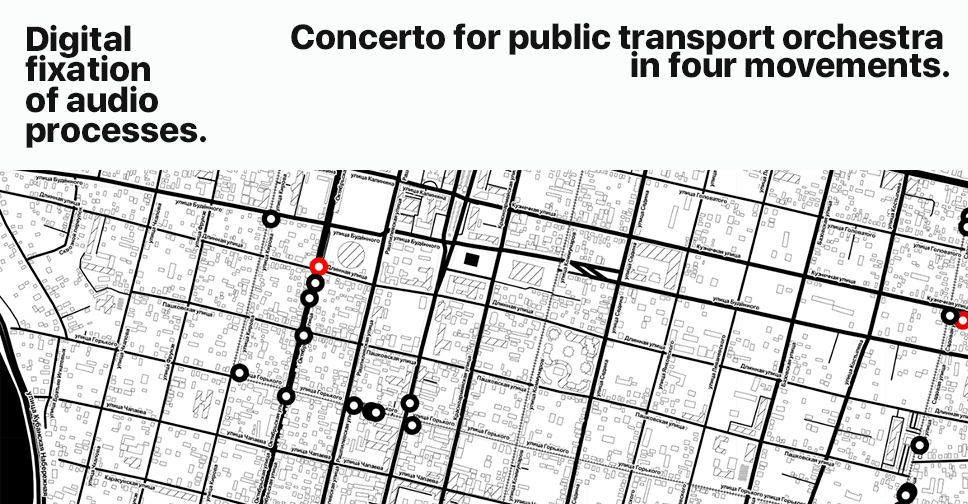 The algorithms regularly receives data about the movement of public transport from a server in Latvia, which provides this data to several transportation services in several cities in Russia and the Baltic States, and interprets (sonificating) this data as a sounds.

The algorithms generates an array of tone frequencies within a equally tempered scale:

In the third and fourth parts, the distance between tones is fixed.

Max Alyokhin
Born in 1994 in Krasnodar, Russia, living and working in Saint Petersburg.

Have higher technical education. Graduated from Krasnodar College of Electronic Device Engineering and the Academy of Marketing and Social Information Technologies with a specialty in “Computing Machines,
Complexes, Systems and Networks”.

Co-founder and active member of the Kiuss art-group. Main areas of work are street activities (street-art), neosuprematism and web development. Co-founder of the cultural center “The Mansion of Culture” (full name—Autonomous Non-Commercial Organization in the Sphere of Culture, Art and Creativity “Krasnodar Regional Art Research and Education Center “The Mansion of Culture”) and the gallery “The High of Culture”. Author of the
three-part essay “Instructions for Semiotics”. Developer of the web-application for psychogeographic research “Dérive”. Co-organizer of “Dérive” and “The Ark of Culture” festivals. Author of the musique concrète project “Digital fixation of audio processes”. Technical director and designer of the independent book publishing house “Asebeia”.