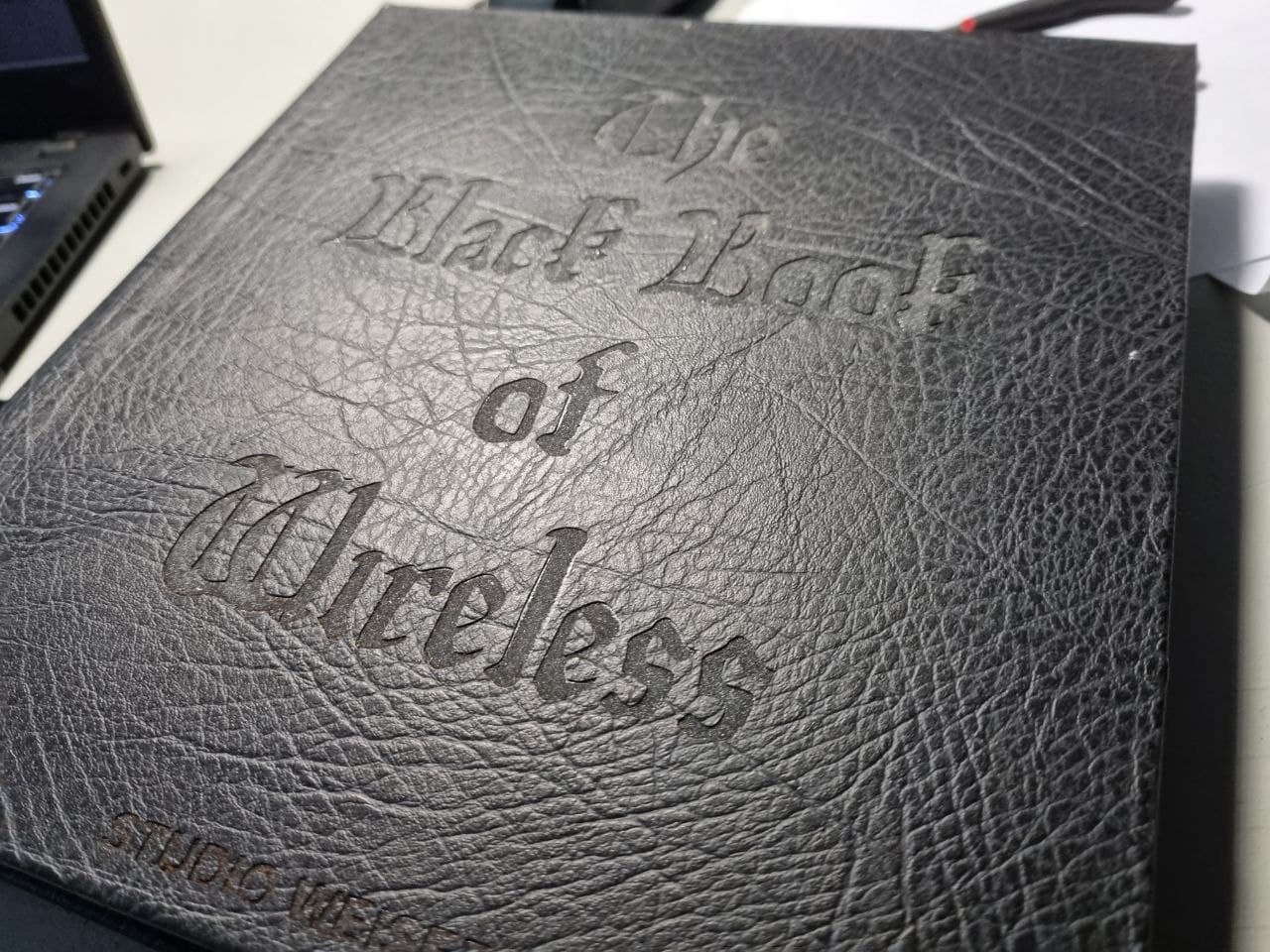 The Black Book of Wireless is intended to be a book of the dark magic that antennas and radios is, with pages that are circuits and PCB trace antennas (copper traces on PCB material) and of which some examples are shown in this iteration. The piece tries to describe the physical connection between form and function in high frequency electronics such that all the traditional passive electronic components can be implemented with just the shape of copper on a substrate: a resistor being the thickness and length of trace, a capacitor a gap in a trace, a coil literally being a spiral or coil shaped trace and more obscure shapes like filters, couplers, transmission lines. The more obscure parts of this is things that are not fully understood or even if you can model and simulate how you think they will behave you have to try them out to see how they actually behave. For examples in the pictures see e.g. the UWB antennas that look like little faces or funny cartoon shapes and the fractal antennas with funny shapes and turns trying to maximize their length in a finite space or the Vivaldi antennas curved shapes where the maximum and minimum gaps between the copper bodies define the range of frequencies the antenna is tuned for while not even being connected the input – the input is on the opposite side of the PCB being coupled and in that way conveying the received signal.

Black Book of Wireless receives and decodes radio signals present in the local environment such as Air Traffic transponders for airplanes flying past, AIS transponders from ships, GSM communication between local cell towers and phones, Wifi communication between devices and base stations. Decoded information as well as description of other artefacts such as pcb trace antennas and a software radio system that can be a rogue GSM baase station (the white beagle bone and the white usrp software radio board with gsm antennas) is continuously printed on terminal style min screens distributed across the table.

Unintended Emissions reveals meta-data such as make of device, networks the device previously connected to and Internet connection requests transmitted by the device out into the air, employing two arrays of directional Yagi antennae the project attempts to determine positions of Wi-Fi devices in the vicinity.

Similar to surveillance and tracking systems such as StingRay, Unintended Emissions places mobile Wi-Fi users on a 2D map indicating the kind of device user has, time of appearance, user’s network activity and other user-specific meta data. This information can be further analyzed to determine the user’s identity and movements within a locality and the Internet.

Using methods and technologies known to be deployed by federal, surveillance initiatives, the intervention seeks to engender a “healthy paranoia” in the interests of an increased techno-political subjectivity.

Virtual Private Networks (VPNs) have come into increasing demand in recent years, providing route encryption through hostile networks. In China, Vietnam, Turkey and Pakistan they also serve to mitigate government censorship, such that foreign sites otherwise blocked by state firewalls are made available to VPN users (Twitter, Facebook, Wikipedia, activist sites and digital libraries being the most common).

Vending Private Network takes the form of a condom vending machine, such as those typically seen in public toilets, nightclubs and bars. Equipped with mechanical buttons, a coin-slot and USB ports, it offers 4 VPN routes, each with an animated graphic depicting the route as a fantasy destination.

Audiences are invited to insert a USB stick into the slot, a coin (1 pound or euro) into the machine, and to select a VPN destination by pressing a mechanical button. In doing so, a unique VPN configuration file is then written to the USB stick. Special instructions (in the form of a README.txt) are also copied, explaining how to use the VPN in a special ‘sheathed’ mode that evades detection methods (namely Deep Packet Inspection, or DPI) used by corporations and state-controlled infrastructure administrators. This is the only means known to work against state controlled firewalls.

Vending Private Network is especially designed for use in wealthy countries; only then can its ulterior motive come into play: leveraging economic and cultural privilege to benefit those less fortunate. With each VPN config paid for, another ‘shadow config’ is generated, to be later shipped to dissidents, activist organisations and others in Turkey, China, Vietnam, Afghanistan, Iran (other countries to be confirmed) such that those that need it most can enjoy protection and access to the open web.

The coins inserted into the vending machine also directly fund the VPN running costs, whose tally is displayed on each screen of the vending machine. Should a particular VPN not have enough money deposited to pay for monthly server hosting costs, it is shutdown, with a white on black notice on the display that it no longer functions due to insufficient public funding. Should money sufficient to cover costs be donated the dormant server will boot back to life and public service continues.

Just as one might expect to see on a condom vending machine, Vending Private Network is adorned with the sticker “Get Protected”.

WannaScry! is a video-conferencing server that operates from an exhibition venue and publicly displays and stores video calls conducted through it. Real-time and recorded video-chat are projected inside a Palantir*-like scrying ball.

Practices of communication interception, distortion and manipulation are broadly exercised in cyberspace as a means of control and monetization; all the while the recent increase in usage of video-calling services created an abundance of personal media-data which itself became an easy and desirable prey.

Privacy negligence – like in the example of Zoom Leaks – intentionally or not may expose users’ most private biometric information to data harvesters and those alike.

WannaScry! illustrates a security breach of a video-calling service and demonstrates to the public the extent to which personal biometric data can be intercepted and extracted by malicious cyber-actors and state agencies.
Information such as age, sentiment, location of a user complemented by a transcript of their chat is collected. However, instead of being sold on the black market this information is presented publicly.

WannaScry! seeks to draw attention to the next generation of our interrelationship with the internet and vulnerabilities that come with our accelerating sublimation into cyberspace.

Taking the shape of a large scrying ball, or “palantír” on the surface of which images of
intercepted video-calls are projected, WannaScry! installation references “remote viewing” –
known as an extrasensory ability, today is easily afforded by the functional principals of the
internet.

Connected to a rigged video-calling service platform, WannaScry! covertly joins every call
placed on that service platform, copies complete video/audio streams of each call and
projects those onto its spherical display.
While displaying contents of each video call, WannaScry! attempts to extract facial
(biometric) and conversational (sentiment and context) data of those individuals participating
in the call, including their geographic location. That information is then relayed visually to the
audience.

Using their mobile devices audiences are invited to place video-call using WannaScry!
service and witness their own images appear inside the gazing ball.
https://vimeo.com/manage/videos/523667524

Photo manipulation has existed as long as photography has existed. Recent research has leveraged machine learning to do things such as face swap to replace the face of a person in a video with another persons face or to be able to drive one persons face with the motion of another face thereby e.g. making it look like a persons says or a reacts in a way that they didn’t do.

With our visual culture, in news, politics, social media etc, the ultimate proof of that something actually happened, or what someone actually said, has for many decades been the moving image documenting the event – what used to be perceived as the unquestionable absolute truth.

We have now rapidly moved into a time where this is no longer the case, where images and videos are malleable and easily edited to misrepresent events, to literally put words in someones mouth that they never uttered, or place people at a scene in which they never were.

This obviously has far-reaching implications in a society that puts the ultimate trust in the image be it a surveillance camera, a news coverage or a video posted on social media. FakeDeeper demonstrates this in a simple and direct way by having the face of a visitor drive the faces on 3 still images making them move their mouths, pose and facial expressions as the visitor does in front of the camera in real time. The live situation also allows for weird deformations and glitches and the possibility to easily break the illusion in ways that a deliberate fake video production would of course edit away but then also hints at artefacts that can reveal the fake while also emphasizing how much can be done easily with readily available code, machine learning models and only still images and a webcam.