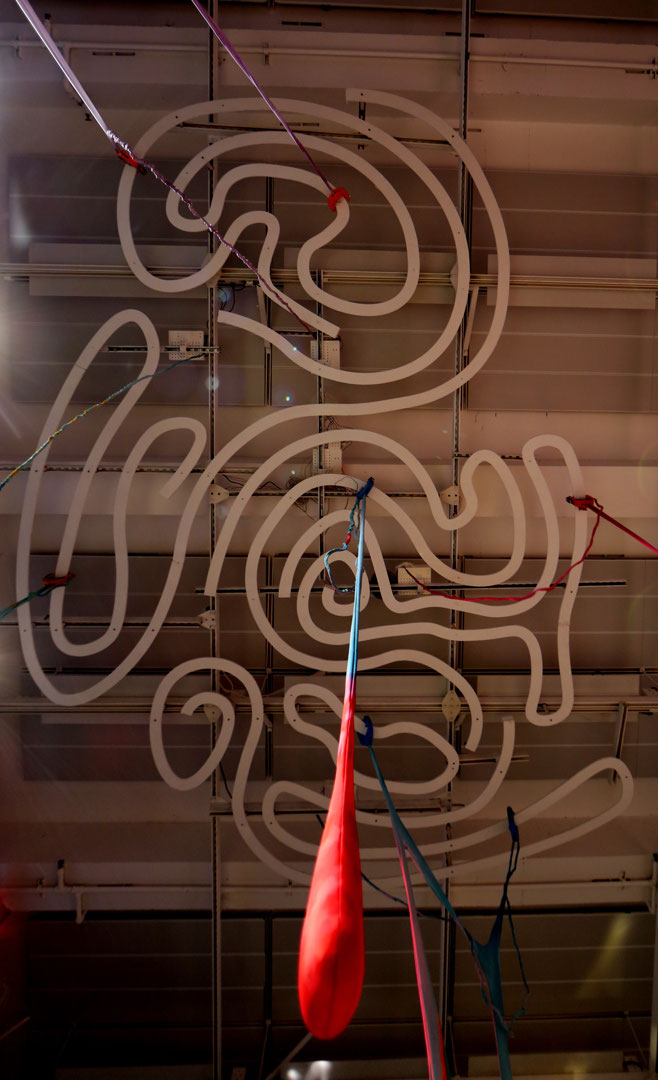 The little cars Wally, Dory, Mortimer, Ferguson, and Baxter move back and forth in different combinations on the wood curvy tracks. They report their location to the brain of the system that functions as a communication line between all of them. The brain remembers and communicates the position of each sculpture to the other that is in proximity. For instance, when Wally and Dory are the farthest from each other they might realize they miss each other and therefore go into a certain state of behavior that reflects their sadness while if they are closest to each other they might mingle. Once every so often, they move together or towards each other. The tracks never cross so the sculptures can never touch each other unless they are already tangled together, coupled, from the beginning.

When the visitors walk they first see the movement of the fabric sculptures and then realize the tracks. All of the electronics in the ceiling are somewhat hidden because the tracks are designed to blend into the architecture and become an appendage to it. The very complicated system on the ceiling is reflected by not so complicated movements at eye-level. While the tracks blend into the architecture, the vertical sculptures jump out and drool onto the floor as if they are reaching for the audience. The piece facilitates a physical relationship between the architecture and the residents in it.

As the visitors enter the installation and walk through they have to change their behavior in the space according to the sculptures or interrupt the system. They may choose to interrupt the system by pushing the pieces out of their way, pulling them, or just holding them. This physical interruption by the audience interrupts the relationships within the system. Every time the audience chooses to hold one of the sculptures a second more than the sculpture is supposed to stay in that place, the counter in the brain that remembers and reports where the sculptures are or what they are supposed to do next gets interrupted and confused. As a result, the relationships between the objects alter.

In contrast, the audience is also interrupted by the sculptures. When placed in a cramped space where the audience has to walk through the sculpture to get to the other side, visitors that do not want to touch the pieces will have to navigate around the pieces and walk in a zigzag like pattern or get hit by them.

My aim in this project is to investigate relationships between mechanical objects that have physical qualities within a closed system and the system’s relationship to the architecture and the audience. It is a meditation on how two very separate entities like the visitor and the art piece can affect each other physically but not be aware of the unseen consequences that may follow their physical interaction.

Berfin Ataman is an Artist, Designer and researcher. Her artwork has been materialized as wearables, installations, and other soft, kinetic, sculptures. Over multiple series and projects, she has explored humans’ relationships to their environment and the non-human.

Berfin Ataman was born in Izmir, Turkey. She went on to get her BFA in Theatre Design from the University of Southern California, her Post – Baccalaureate degree from the School of Art Institute Chicago, and her MFA from UCLA, Design Media Arts. She has shown her work in Chicago, New York, Los Angeles, Korea and Istanbul in galleries and museums.