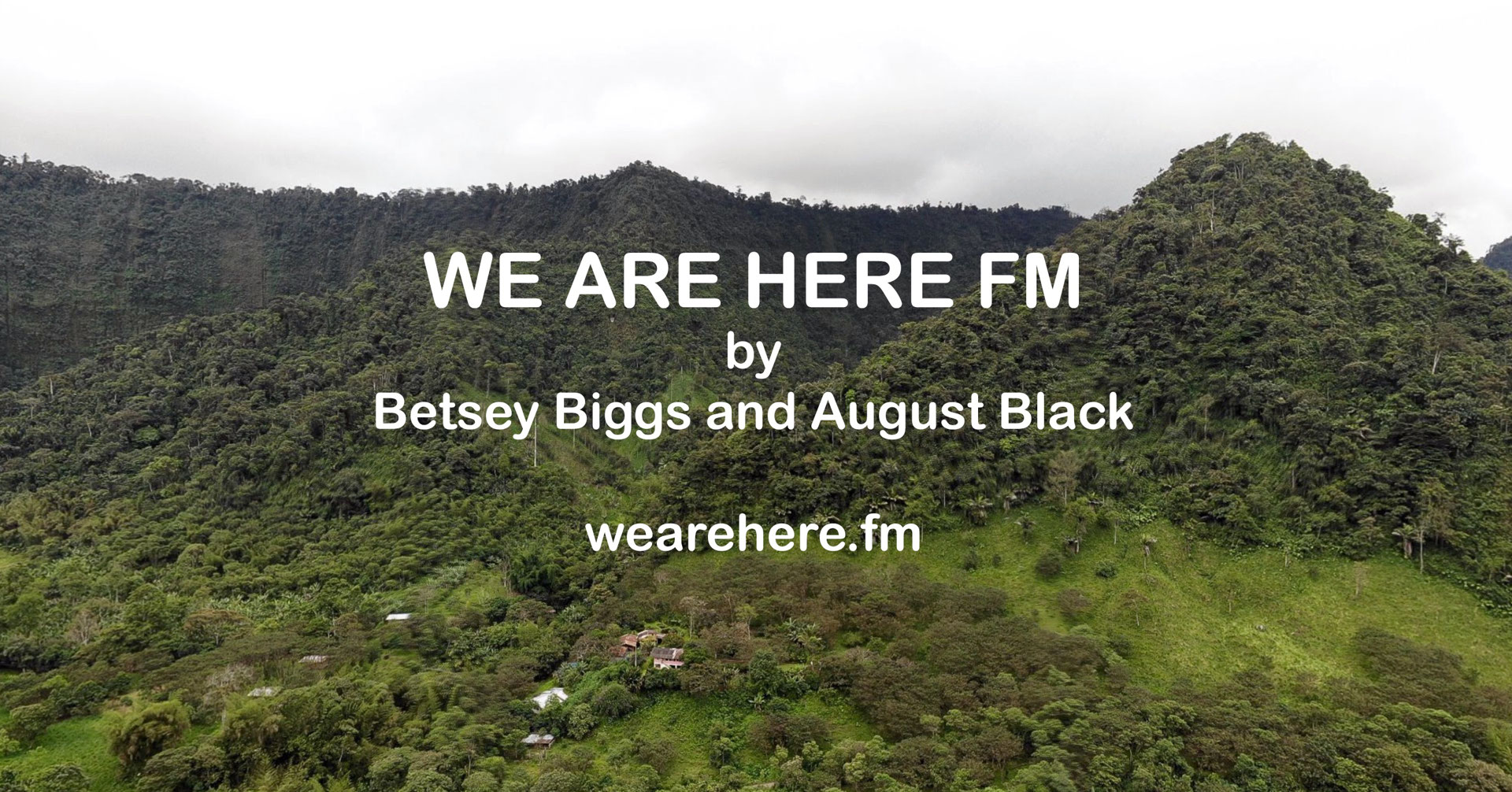 We Are Here FM is a web-based audiovisual installation and transmission created by Betsey Biggs and August Black. A constantly shifting audiovisual radio station of sights and sounds, it brings together geo-tagged landscapes and audio clips to create unnamed, imaginary, hyperreal landscapes, whose generative musical soundscapes are at times magically experimental and at times utterly mundane. Best experienced at life size projection, the audience must locate themselves within a realistic, yet utterly artificial landscape (both exterior and interior) and negotiate their place within it. Because We Are Here FM is a streaming experience, all listeners form a community experiencing the same landscape. The project was made using free and open-source software such as React, Node, and the Janus WebRTC server. We hope you will enjoy getting lost with us.

Betsey Biggs uses technology to combine image and sound in site-specific works, audiovisual performances, interactive installations, public interventions, relational projects, films and videos, musical compositions and multimedia theatrical works. Her body of work connects the dots between sound, music, visual art, place, storytelling and technology. It also deconstructs and arranges scraps of sound and image to clarify and recreate the experience of place, as well as
adapting the technology of our contemporary world – mobile audio, digital video, interactive electronics – to engage people creatively with the physical and social worlds around them. Her work has been presented at ISSUE Project Room, the Abrons Arts Center, Roulette, the Conflux Festival, MASSMoCA, Brown University, Harvard University, Sundance Film Festival, Hong Kong’s Videotage and on the streets of Oakland, CA and Brooklyn, NY. She has collaborated with Pamela Z, Margaret Lancaster, Evidence, The Now Ensemble, The BSC, So Percussion,
Tarab Cello Ensemble, the Nash Ensemble, Grand Valley State University New Music Ensemble and filmmakers Jennie Livingston and Amy Harrison. Biggs earned degrees in English Literature and Music from Colorado College and Mills College respectively and a PhD in Music Composition from Princeton University. She has also held fellowships at Brown University and Harvard University, and taught at Princeton, Brown, The Rhode Island School of Design, and
the University of Colorado, where she currently serves as Assistant Professor.

August Black is a hybrid practitioner of art, design and engineering. He makes experimental spatial and acoustic situations, often by building his own technological artifacts and instruments in hardware and software. His past work focused on live networked audio, mixing FM radio with user input through online software. His current interests span the fields of the philosophy of technology, software studies, techno-politics, peer-to-peer networking and AI/machine learning. In the past, he’s been a member of arts organizations such as the ORF Kunstradio and the Ars Electronica Futurelab, as well as a former member of the engineering team at Cycling ‘74, makers of Max/MSP. He has shown works at festivals and venues such as Ars Electronica Festival, Dutch Electronic Arts Festival, Wave Farm, Transmediale, Pixelache, LA Freewaves, Piksel Festival, Polar Circuit and the Tasmanian Museum of Art, among others.He earned a BFA
at Syracuse University and was an NSF IGERT Fellow at UC Santa Barbara, where he completed an MS and PhD. He’s taught media and art classes at UC Santa Barbara, University of San Francisco and CU Boulder, where he serves as Assistant Professor of Critical Media Practices.