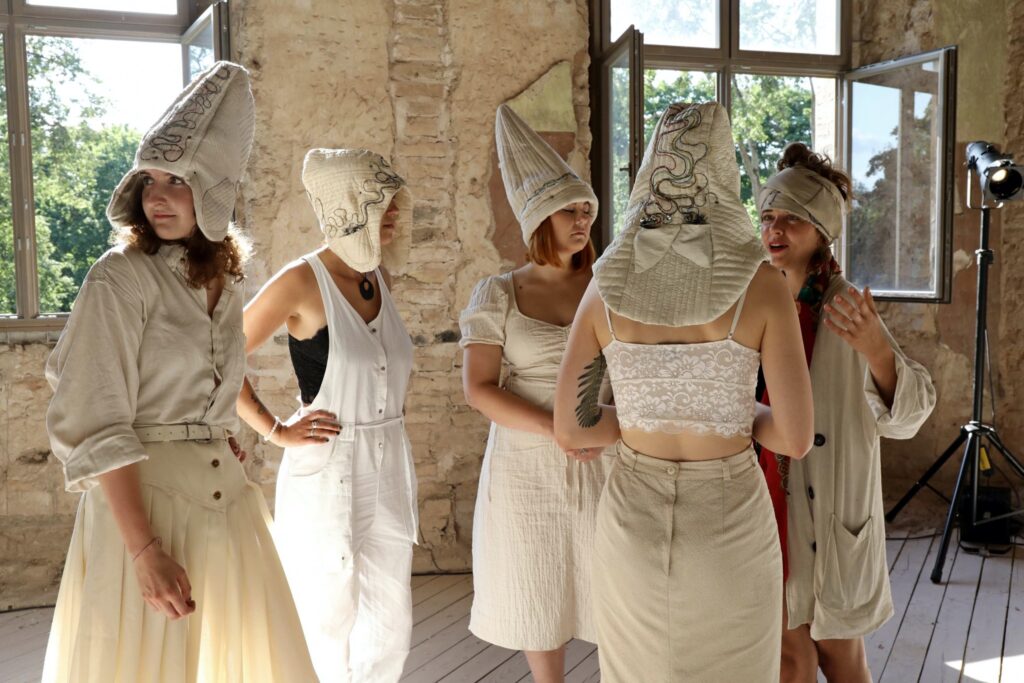 This workshop is part of the Performing Arts Workshop program, electronics and free/libre technologies applied to the performing arts. It is a Piksel initiative in collaboration with Bergen Dansesenter – resource centre for dance in Vestland.

To register please send an email to: piksel21@piksel.no with your name and the name of the workshop you want to attend.

You and I, You and Me
by Mindaugas Gapsevicius (LT) and Maria Safronova Wahlström (SE)
http://triple-double-u.com/you-and-i-you-and-me/

Imagine the future. Humans, computing machines, and various types of hybrids share the space they live in. Senses are altered, some are inextricably linked to computing devices. Electricity is used to control the space and beings living in it. Humans take responsibility to reshape social ties to avoid being controlled by corporations and machines.

The project You and I, You and Me explores the impact of the environment through electricity. How far could electricity help in understanding the other? Is there a possibility to alter human senses by electric impulses? During the participatory event, the audience is invited to experience the environment, including other humans, by wearing jewellery, shoes, and headwear.

The project production was supported by the Lithuanian Council for Culture, and the Nordic Council of Ministers
https://youtu.be/NmVE_78Y43o

The workshop will guide through the different wearables objects: jewellery, headwear and shoes which leads to different public interactions:

The jewelry pieces hold within it a small LED powered by the human body. Being very sensitive, the flashing of the LED depends on humidity, temperature, contact to the body, and other parameters that affect the components used for the circuit.

Headwear.
The project was inspired by research on brain-to-brain interfaces, including the study “A Brain-to-Brain Interface for Real-Time Sharing of Sensorimotor Information” by Miguel Pais-Vieira et al. Following the research, the collection of wearables questions the boundaries of empathy. Aesthetically, the project refers to traditional headwear and the role of headwear in signalling human identity to others.

Shoes
The collection of shoes uses excess human heat, which is turned into electricity to generate sound. At the same time, shoes refer to daily clothing, something humans wear to protect themselves from unexpected environmental obstacles, including other organisms that are not necessarily always friendly to humans as well as cold. While being affected by the ambient temperature, light, and movement, the shoes suggest rethinking human’s relationship with nature.

Furthermore, the collection critiques the hype surrounding renewable energy, which often pollutes the environment no less than the energy obtained from burning gas or coal. Could excess human heat be considered renewable energy?

Mindaugas Gapševičius (born 1974) lives and works in Berlin, Weimar and Vilnius. His workquestions machine creativity without presuming that the human being is the sole creative force. He has completed MA studies at the Vilnius Academy of Arts in 1999 and received a Master of Philosophy degree from the Goldsmiths University of London. He is a creative fellow at the Bauhaus University in Weimar since 2015. Gapševičius was one of the initiators and founders of Institutio Media, the first Lithuanian media art platform (1998), as well as the European Migrating Art Academies network for emerging artists (2008). Along with colleagues from the TOP association, he initiated the first TOP community biolaboratory in Berlin (2016). In 2019 he established Alt lab, a laboratory for non-disciplinary research in Vilnius. Gapševičius’s works have been shown at the Ars Electronica festival in Linz (2019, 2020), the National Gallery of Art and MO Museum in Vilnius (2019), Piksel festival in Bergen (2018), RIXC art and science festival in Riga (2016), Pixelache festival in Helsinki (2015 and 2016), Pixxelpoint festival in Nova Goritsa (2014), KUMU Museum in Tallin (2011).