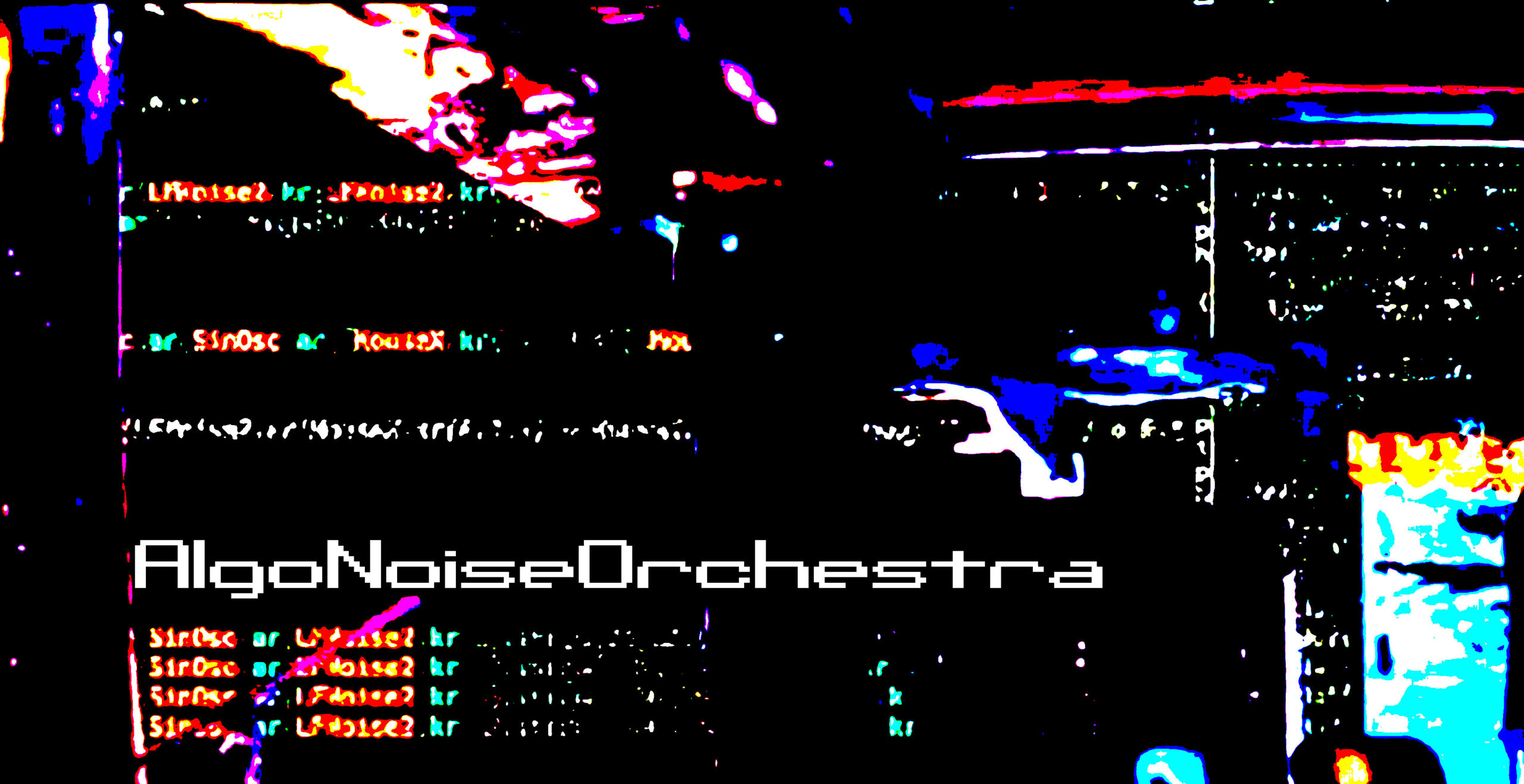 The orchestra, the Network and the Performance
Direction: Jenny Pickett and Julien Ottavi (APO33) with Marinos Koutsomichalis and Madlab
Visuals performance: Maite Cajaraville and Gisle Frøysland

AlgoNoiseOrchestra is a live coding open group started by Apo33 in 2018 to create a bridge between workshop participants and the stage performance as a way to create an orchestra (ONline/OFFline) using only code as tools to make music. The Algorithm combines to noise music with the collective aspect of an orchestra bring together new ways of creating electronic music together. AlgoNoiseOrchestra does not intend to bring you a rave party but rather to create listening works and physical experience without a specific rhythm or any idea to make you dance. Visualisation of the live code in process is not a primal requirement, it could be displayed but other visualisations are also integrated such as live cinema or 3D video live.

For the AlgoNoiseOrchestra the orchestral format is coming as natural as it is for musician to meet in group and play together, except here we formalised it in this old ideas of the orchestra to pervert it in another direction that have been given by the Cambridge english dictionary: “a large group of musicians who play many different instruments together and are led by a conductor”, here we play only one instrument (if computer could be an instrument?) with multiple codes and possibly multiple live coding software. As for the conductor it is not a necessity but will depend on the performance, as it could be a machine, a general direction, or an improvisation or a form of horizontal organisation. Since early 2000’s numerous ensemble have been created where computers is the main tools to produce music (From Mimeo to Goo, Linux Computer Orchestra or Offal), the objectives of this orchestra is to set up a common ground to play AlgoNoise as an ensemble in order to formalised this practice and to proposed a space for composition open to all composers or not. The orchestra is also composed of different members who come across and join the introduction workshop that introduces participants to the practice of live coding and noise music. AlgoNoiseOrchestra involved members through workshops but proposed performances afterwards in different contexts, from live situations in a venue to online performance and hybrid concert (ONline/OFFline). Network and internet as a place of diffusion became for the last years (2020/2021) a common ground for many musicians, AlgoNoiseOrchestra embraces network practices as one it’s main relation to concert and performance, also because it might not always be accepted or involved much interest from promoters but mainly because live coding is also interesting in a context without the pressure of the stage. If the AlgoRave proposes evenings that are fun, sometimes playing noise music seems not very fun for the organisers or some part of the public making the performance rather unpleasant for everyone. You need to find the right venue for this type of music. Network also brings a useful methodology for automated direction and different forms of composition including the ones that involve chats instruction or live composition (as for improvisation but with a sort of conductor even if that one is multiple). By consequence the performance of live coding noise music (AlgoNoise) explore a different relationship to the stage, noise musician knows perfectly but less coders or workshop participants, the online performance allowing a distance from the stage in order to open new practitioners in both practices: noise music and live coding.

JENNY PICKETT is a member of the artists’ collective APO33 (art and technology research lab) in France, where she
works on projects ranging from interactive installations to experimental music and performance. She forms part of the duo Solar Return with Julien Ottavi and is phd candidate at Cyprus University of Technology where she is attached to the Media Arts and Design Research Lab (MADlab). Her research interests include critical approaches to music and technology, interactivity, hybrid and participatory practices in art.

APO33 is an interdisciplinary artistic, theoretical and technological laboratory that develops various collective projects
combining research, experimentation and intervention in the social space, based in Nantes, France. Apo33 works within the dynamics of the free software movement: a modular space, initiating open collaborative projects and creative processes and exploring new modes of artistic and creative production, transmission and dissemination.