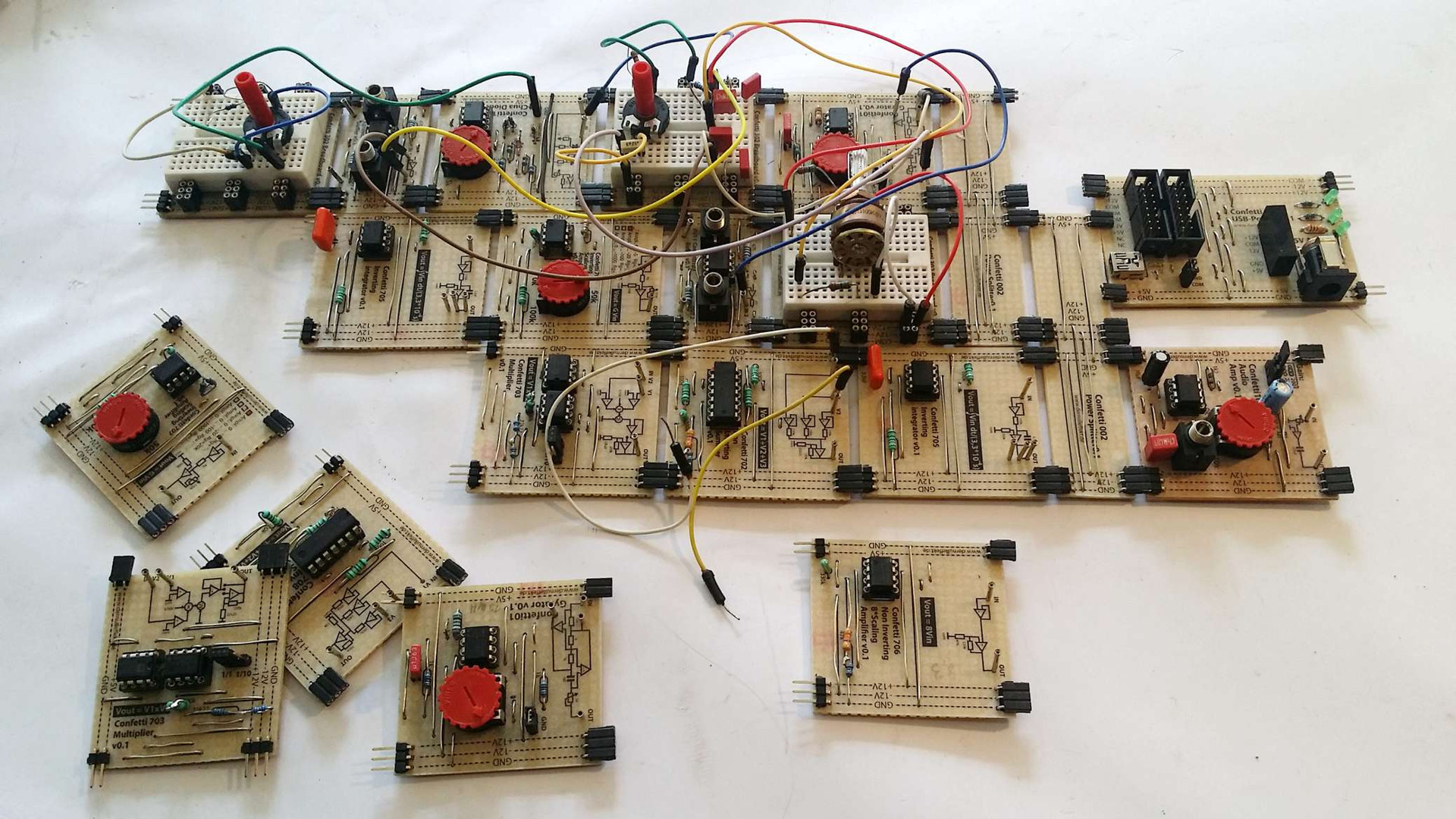 by Wolfgang Spahn, 2021
A workshop for an Chua Circuit with in an analog computer to generate chaotic signals, noise and sound.

This circuit generates chaotic signals over a wide range of frequency therefore it is an interesting device for noise and sound art, performances and installations.
In the 1970th Edward Lorenz developed a mathematical model for the weather and climate prediction, the Lorenz Attractor, a strange attractor with chaotic and fractal behavior and sensible initials conditions, that in the end could lead for example to a tornado in Brazil – the so called Butterfly Effect.

At that time it was not possible to compute this module with in an analog computer, the chips for doing the multiplication were to noisy. That’s why in 1983 Leon O. Chua introduced a much simpler circuit (no multiplication) with the same chaotic behavior, the Chua Circuit.The Analog Computer Confetti is a modular system that makes it possible to perform all kind of computations and operations on base of electrical voltage. This stack able modular electronic analog computation system was and is still developed by Wolfgang Spahn since 2015.

In the workshop we will learn the basic functions of an analog computer. We also will build the two main components for an Chua Circuit as modules of the analog computer Confetti: a Gyrator and a Chua Diode. With these two modules we will create the Chua Circuit to listen to the butterfly in our tornado.

Wolfgang Spahn is an Austrian-German sound and visual artist based in Berlin. His work includes interactive installations, miniature-slide-paintings and performances of light & sound. His art explores the field of analogue and digital media and focusses on both their contradiction and their correlation. That’s why he is also specialized in re-appropriated and re-purposed electronic technologies.

Spahn’s immersive audio-visual performances merge the technically distinct production of images and sounds. In this respect the data stream of a digital projector becomes audible whereas the sound created by electromagnetic fields of coils and motors will be visualised. Spahn is facculty member of Sound Studies and Sonic Arts of Berlin University of the Arts. Spahn presented his work in national and international exhibitions, Biennales ad Festivals.